A little about Ryan.

Like others on the Connections Marketing team, Ryan was born an artist. Writing the alphabet around your entire body in marker at age 3 could be described as nothing less. Although his  artistic canvas has moved on from the human form (literally), his sense of aesthetic appeal has only grown.

Ryan came to the Connections team in December 2013 after honing his skills as a designer and developer at a number of well-established companies in several different industries. He is driven by the passion to build influential media backed by clean, logical code, delivering to the client world-class websites and applications.

Ryan is our resident WordPress expert. Sure, he knows a plethora of other CMSs (he’s a professional!), but he also understands the client. No one wants to pay for a website or application and get back a beautifully crafted piece of technology written in a foreign language. Ease-of-use is key.

Ryan graduated from Purdue University West Lafayette in 2004 with a B.S. in Computer Graphics. His specialty was Interactive Multimedia & Design.

He is an alumnus of Marian Catholic High School in Chicago Heights, Illinois, where he captained the varsity soccer team during his final year.

A brief interview with Ryan.

“Safety Dance” by Men Without Hats. It’s mainly because Turk on the show Scrubs. Go search it.

If you could sing one song on American Idol, what would it be?

Definitely a ballad. Something like “Lights” by Journey. It would bring the house down!

What sport would you be a professional athlete in?

My health says grilled, but my taste buds want fish and chips.

Meet the other half of your team.

Although we may be the drive you need to bring your business to the next level, let’s face the facts: We couldn’t do what we do without you. Meet our leadership team. 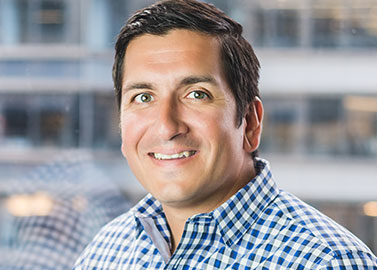